Delving into AD&D: Everything you want to know about First Edition Combat. 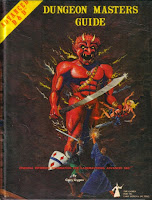 Gary Gygax wrote some great prose in first edition ADnD. But there were sections where things were not so clear. One of them was how initiative is supposed to work in combat. Luckily a couple of years back a guy named David Prata wrote A.D.D.C.I.T. which lays out the entire first edition combat in detail backed by footnotes.

It may not be the definitive interpretation of ADnD combat but is certainly one of the most complete. For me personally after reading it I finally got what Gygax was getting at in the 1st edition DMG.  The two key points are

Nice. I think Random Wizard did something similar once, but it was done as a multi-page flow-chart.

Classic AD&D rules debate: why on earth would a faster weapon gain the potential for a second attack only in the case of tied initiative? "Sorry, you won initiative, you get only 1 attack this round."

cirsova: It was skidoo who did it. The flowchart can be found on Mediafire storage.

Thanks, for the link, faoladh!