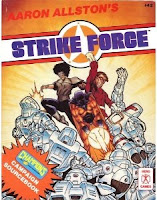 Aaron Allston was a noted RPG authors in the 90s who a number of good RPG supplements for various games. Sadly he passed away in 2014 in his 50s from heart failure. Strike Force for Champions is considered one of his best supplement but more than that is considered one of the best campaigns supplements for any game. It is a well written account of the details of his Strike Force campaign and more importantly delves into the nuts and bolts of how he ran that campaign including the reasons why. While much of is about the nuts and bolts of a superhero campaign, many of the insights he provides work for any type of campaign.

Luckily for us, his legacy is not finished. A group of friends is working to finish his manuscript for an updated Strike Force and now have just launched a kickstarter. I am personally interested in this as the original was very good and that was just from a few years of running his campaign. I can't wait to see what insights he gleaned from the intervening years.
Posted by Robert Conley at 2:04 PM

I'm also eager in finding out the results of this new version. I've seen pages of the original, but never owned a copy...