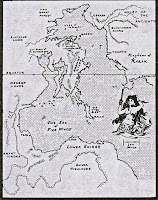 Dark Tower and Thracia were AD&D modules. As far as I know they were not set in the Wilderlands. I'd totally add Badabaskor to Rob's list though

Dark Tower is set in the Wilderlands. Thracia is not for AD&D, it's for D&D.

I don't follow re-releases, and of course you can list what you want. But both Dark Tower and Badabaskor mention Wilderlands. A brief scan reveals that Dark Tower has a caravan in the village that is noted as headed towards the City State of the Invincible Overlord, and they are staying at the Overlord's Inn. Badabaskor's historical background uses the CSIO calendar, listing a date of 2611 BCCC, and there is a dungeon room that mentions Altanian princesses. Again, just a brief scan, it's not that important. Thracia doesn't have any explicit Wilderlands references as I recall, but we used it there from when it was first released, and I can't imagine adventuring in the Wilderlands without it. Since your post said "what original Judges Guild supplements were useful for a Wilderlands campaign," I thought nothing of suggesting it. But again, I don't argue that your recommendations are your own.

Looks like I'll be adding Dark Tower to my collection then shortly as I have everything else.

The map on page 6 of Dark Tower doesn't correspond to any known location on the Wilderlands map. As for the Overlord's Inn and the Caravan it is a throwaway line.

This caravan carries spices and rich cloth for merchants of the Invincible Overlord (or any major city in the gamemaster's campaign).


As for Badabaskor, the 5 mile map doesn't correspond to any location within the Wilderlands.

Not to say either can't be made to fit easily it clearly an afterthought in Dark Tower. As for Badabaskor it is unclear where it was originally set at. It could have been a Middle Earth adventure that was adapted. But because the Altainian princess was mentioned on level five, I choose a hex on Map 2.

Compared to Prey of Darkness which is explicitly set in the Elephand Lands centered around Hex 4417. Or Tegel Manor which has an explicit location on Map one.

Yes there is no specific location for Badabaskor, listed in any printing of the module, however Emperor Brastagoth (who is from the Wilderlands) is mentioned as finding a lone mountain so situated that it surveyed the land for many leagues around.

Brastagoth was an Emperor of Kelnore, which is now known mostly as Tarantis, and the Glow Worm Steppes. By your own hand you mentioned the Orichalan Dragon Lords occupied the ruins of Badabaskor for a time. The only mountain that is alone situated so that is surveys the lands for many miles around that is anywhere near Tarantis is in hex 2610 in the Valley of the Ancients, in the traditional home territory of the Orichalan Dragon Lords.

Love it. The "Complete Listing of all City State Adventures" in CSWE Book 3 is often ignored but for what it's worth JG staff at the time included Badabaskor and Citadel of Fire as well as Druids of Doom and the Portals books (why not, I guess). First Fantasy Campaign of course also counts, being set in the far north.

The JG adventures I've found most useful were not explicitly set in the Wilderlands - I set The Ilhiedrin Book on the western plains SW of Swarthlad Plain, and Caverns of Thracia in the Ghinarian Hills of Altanis. I think these were useful because they are relatively low level and so can be placed at start of campaign; I have never got to use the high level adventures like Badadbaskor, Citadel of Fire, or Dark Tower. :)

I just discovered the Wilderlands a week ago, excited to finally find a setting that I like! I'm trying to locate and read the materials as efficiently as possible, which is some challenge, so thanks for the list. And, thanks for carrying the torch! You mentioned that you have another supplement coming anytime now? Can I assume that you will announce here and link it to someplace like Drivethru RPG?