Reflections on a lot of dead orcs.

In no particular order

The whole thing started because of a random encounter. While I knew was in the region I had no clue that in a Orc hunt was in the works until it occurred. Luckily it happened late in the session so I had some time to prepare. Otherwise I would have winged at least an orc outpost and then prepare something more elaborate later. A lot of my campaigns have moments like this and it is what I feel the essence of running a fantasy sandbox.

Another I will point is that I have no problem with high level parties going up against low level opposition. When you run sandbox campaigns that can and will happen. Of course there are always consequences even if they manage to spectacularly slaughter hundreds as they did in this adventure. And those consequences led to... yup even more adventures. Perhaps against a more experienced foe or perhaps not.

The map is actually something I drew up long ago 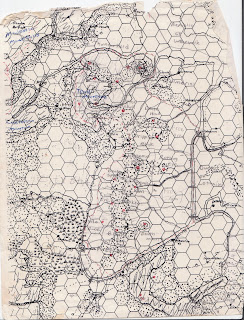 I been working on a master map of the Majestic Wilderlands for a while so I just exported what I had done and overlaid the information from this map on it. 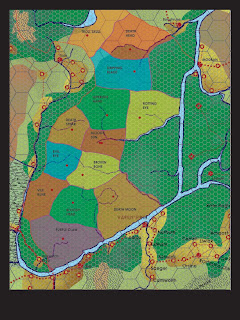 Players been having a go at the Orcs of Deathwoods since my campaigns of the early 80s. Somehow the orcs always managed to bounce back.

The use of Battlesystem went well. As it turned out it was good that brought it as I had to use the counter for large rooms in the orc warrens with each counter representing four orcs.

Basically the way Battlesystem work is that you look at the target's AC, the attackers THACO, subtract one from the other which produces a modifier. A higher modifier is worse. Then you roll 2d6, add the modifier and look it up on the Battlesystem chart. This produces the number of hit dice of damage.

Battlesystem abstracts damage and hit points into Hit Dice. So an Orc has 1 HD, a Ogre has 4 HD and so on. They reached back to Chainmail for the inspiration on this.

Then you shift to a higher dice column if you have a damage bonus. So a unit doing 1d8+2 would start with the d8 column and shift over to the d10 column and then the d12 column. Multiple attacks each look up their damage separately and are added together. For heroes each HD of damage inflicted on them does 4 hp.

As pointed out earlier the system is built when there is 10 individuals per figure. When you have 5:1 or individual a +modifiers is added on top of everything else. For individuals this is +15.

So I figured out the math for Ascending AC and using To Hit Modifier instead of THACO. It worked well in play but I had to write down a table of everybody AC and modifiers to make it go quickly. It wasn't enough to just have the stats on cards. 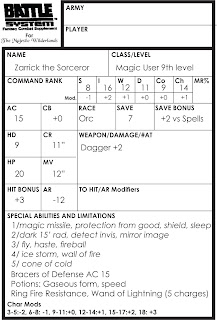 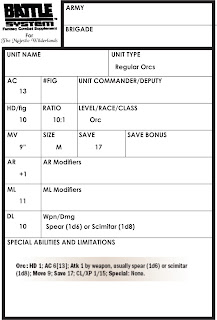 The battles are not as challenging as they could have been. In the first one advancing in close order was a big mistake against the fireball the parties possessed. The orcs quickly suffered morale checks, failed, and ran. The second was better as the orcs advanced in skirmish formation and the battle went as well as I hoped. The party had their backs on the wall and were bloodied but they managed to execute a plan that saved the day for them.

I have to save for the OD&D fighter, mass combat is where they shine. Now the group had a lot of fireball runes (think scrolls) so it wasn't readily apparent. But on reflection the fighters were the ones really pumping out the damage. Especially against the one HD creatures. I think a lot of the complaints about fighters vs magic-users would disappear if mass combat was used more.

The Orc Wizard really made a difference as well. In any setting using DnD mechanic having heroes is critical. Heroes will need some forces but there are cases, this this one, where a group of only heroes is enough to turn back the orcs.

Two other things I overlooked. The Orc wizard's magic items, just plumb forgot to use them. Although after the attack of the knight and the fire elemental probably wouldn't not have made any difference. Then I forgot to add Warg Riders. The big impact of having them is that they are not considered 1HD creatures as the mount and rider combine to produce the final stat card.

Timewise both battles did not much longer than a regular OD&D combat which was a pleasant surprise. With experience it would probably take just as long. One time saver is that you treat each unit (with 4 to 15 figures) as a single entity..

Speaking of unit cards you can download the ones I made from here.

Now that I have run Battlesystem I am really impressed with it. At its heart it uses a Binomial distribution chart to quickly resolve d20 combat. This means it can be applied to ANY edition edition of DnD. Something I intend to try with the Dungeon Crawl Classics RPG.

The player complaints was the switch to 2d6 low, and the fact we were using counters.  Unfortunately any method to use a d20 roll high would be cumbersome. And any simple method would not be accurate or fair. Binominal distribution allows to calculate the odds of success over many trials (i.e. rolls) . The result is a bell curve which means multiple dice need to be roll. Battlesystem elected to use 2d6.

I hope you find this informative and give 1st edition Battlesystem a try.
Posted by Robert Conley at 12:01 PM

Thanks for the post. I am definitely leaning towards Battlesystem now over Chainmail, given your comments.

Now, just need to work a sizable battle into my game!

I enjoyed this look at Battlesystem in play. Like I said, we played it a lot. And yes, a fighter could really step up in mass combat. The ability to just carve up whole units in toe-to-toe fighting meant that you needed Open or Skirmish order to survive fireballs but Closed to stand a chance against a fighter.

It was also fun to have some hero that was as dangerous as a unit could be.

I've thought for a while that the complete rejection of 2d6 mechanics in 2nd/3rd edition was a mistake. It was necessary due to the addition of stacks of modifiers to everything, which would push too many results completely beyond the wings of the bell curve. But that just says to me that d20 games today have too many modifiers!

The success of the normal distribution in so many models of real world phenomena is something that older designers respected as a critically important simulation element for classic hex-and-counter wargames, but it no longer seems to matter to modern RPG players.

A basic question...what edition of the rules are you using?

Thanks! I guessed as much.

First, thanks for the unit and commander/hero cards. There does not seem to be any other images of these on Google that I can find and that's surprising.

Second, we found, over several large army sized battles, that magic users were the most potent force in the game. A high level wizard with a lot of spells can break formations by eliminating a significant number of figures. They also have high mobility, can often strike from invisibility, use dimension door or teleport to move around, or be flying (or all of the above). They are like a cross between a WW-II assault gun and a Predator. On the rare occasions Fighter heroes got close to them, they just blipped away.

The spells in AD&D and the powers of a high level wizard (offensive, because defenses/precautions are never up to the task) preclude any useful defense. This then means in turn that any Lord bringing an army is mostly bringing target practice for the high level mage because other mages looking for a hidden/mobile artillery piece have a hard time also in finding them and pinning them down. This also makes castles and fortifications questionable (rock to mud, how I love thee!).

In order to address this, we ended up creating social prejudice against magic in the world (really, the average person would be scared silly by it and by the idea of guys who can wield it) and that kept magic-users heads down and discreet so as to avoid angry mobs while they were low level. We also assumed the only mages let loose in society (not hunted down by authorities) would be those within the power structure (working for kings, not loose cannons). And we assumed Kings would, much like in some previous eras, have a social-class based rule that would make going after other leaders with magic unlikely (because then others could do it to them).

For reference: We treated the spells as the PHB said, not the nerfed versions in the BS book that they needed because their game's balance is badly broken once you look at the wizard in mass battle context. So a fireball, against troops in close order, could often kill 40 men or at least smash 4 figures and that could cause unit route. A high level FB could do this even to units of Ogres or the like.

BS also made heroes way too strong. Getting 4-6 hits for a player against masses of men is fantasy heroic, but if you like your game a little more reasonable, 2-3 hits for a high level figure is still a lot. We ended up nerfing the hits of individual figures because it felt less like a mass battle between armies and more like both armies being smashed by heroes with magic items and spells.

With the limiting of magic's appearance on the battlefield (other than some rally/morale spells and clerics, seen as more predictable due to them having a known ethos - common men can understand having a religious belief), the limiting of heroes powers, we ended up getting a decent mass battle system out of BS and still use it.

Glad you found the game useful. It was, with the exception of overpowered heroes and magic, a decent mass combat system.