Yesterday I asked about the age demographics of a medieval society. Thanks to Joseph, Todd, Patrick, CastleMike1 over on the HarnForum, I was able to find what I was looking for. Joseph sent me some population pyramids. Using that as reference while using Google books search and image search, I found this in a biology text. 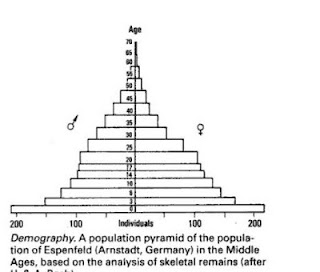 Which is very much like the population pyramid of many third world countries. Like this one from Angola. Which is also a reminder that as humans we still have some work to do to make the world a better place. 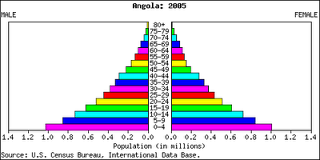 So what this useful for in tabletop roleplaying games? Say you want to flesh out an entire village. Even for a small village the detail can be overwhelming. This coupled the tendency of people to pick certain numbers over others resulting in a strange looking place, like my initial pass on Kensla for Scourge of the Demon Wolf where I had 75% of the population as children. So I want a baseline to see how many old people, middle age people, and so on there on.

Nicholas over on the Harn Forum pointed out that Family Tree on Lythia.com has some stuff in it. Sure enough on the age table there is a Current Age column which is the same as a population pyramid pyramid. I don't need to break it down by year by year so I used a spread sheet and came up with this. Just take the population of the village and multiply it by the percentage to get the number of people of each age. If you want even more detail you can use the Family Tree articles. I divided the age cohorts unevenly.

All the children 13 and under are in one group. Since most medieval started giving adult responsibilities at age 14, I made an age group from 14 to 17. Then a young adult group of 18 to 25, where most are unmarried, then a group 26 to 30 of young married couples. Most medieval men didn't start until their late twenties because margins were so thin that you had to establish yourself before getting married and have kids.

Hope this is useful in detailing your own settlements. I will clean up my spread sheet and post it.
Posted by Robert Conley at 6:00 AM

Interestingly the medivial chart has slightly more females until they come into birthgiving age.

Works pretty well to generalize from this data for gaming purposes, but, as I cautioned yesterday, it's important to remember that health statistics in pre modern socieities are not uniform either from place to place or across time. These kinds of stats can vary widely from place to place. That caveat aside, nice work. :)

Is there some reason or data behind choosing folks to be married mostly starting in their mid-late twenties? My experience with third world countries and rural US involves much earlier marriages and child rearing.

Eric, young marriage is a pretty recent thing being tied to the way we get wealth (via jobs and such) or to modern farming techniques and land availability .

In the past marriage was less formalized (often it was a couple saying they were married publicly , bing bang done) and because of the supreme difficulty of having enough space or wealth, it was often put off till much later.

Interestingly in the West we are seeing a reversion to this situation as young adults have few prospects and much debt (in the US at least). Also as children are an economic liability in the modern world (they actually lower your standard of living) people tend to hold off till they feel ready.

For many nations, basically any other than they most destitute (like Sub-Saharan Africa) this means smaller families and even (as we have birth control) population shrinkage.

I'd like to find the source of the chart on Population of espenfeld arnstadt germany in the middle ages. Where did you get it?